The information contained in this website is for general information purposes only and is subject to change without any notice.

It does not constitute part of an offer and/or agreement. We endeavor to keep the information up to date and correct however we make no representations, guarantees, or warranties of any kind, express or implied, about the completeness, accuracy, reliability, suitability or availability with respect to the website or the information, products, services or related graphics contained on the website for any purpose.

Information about projects is indicative. Artist’s impressions, products, features, furniture, floor coverings, curtains, mirrors, wall hangings, light fittings, furnishings, pictures, images, plans, drawings, amenities, dimensions, elevations etc., if any, are shown as illustrations and for reference only. We reserves the right to alter, amend and vary the layout, plans, specifications or features subject to the approval of the authorities, without prior notice, reference or obligation. Any reliance placed on such information is strictly at viewer’s risk. The copyright, database rights, trade marks, patents, know how, confidential information and personal data and all other intellectual property contained in this website is the property of The Kanakia Group and/or its affiliates.

We specifically disclaim any and all liability for any claims or damages that may result from providing our website or being temporarily unavailable or the information it contains, including any website maintained by third parties and linked to the our website. We make no effort to independently verify, and does not exert editorial control over information on pages outside of our domain. The inclusion of links from this website does not imply endorsement by us. Viewer’s specific questions regarding any information should be directed here.

Submit your Mobile Number to get a Call back

Challenging the norm requires great courage and absolute dedication. At Kanakia, we have always encouraged ‘Different thinking’ when it comes to spaces. And that is why we are recognized as one of the premium developer and featured amongst the top real estate brands in the country.

Our vision for the children is to develop new learning skills, driven by our credo, ‘knowledge is light’, and help them overcome the stress of competition. We will strive to follow the teachings of our vedic ancestors, who have inspired us to use knowledge as the passage from darkness to light.

Kanakia Group with its vision to enhance the lifestyle standard entered into the Hospitality Industry in the year 2010. The first Hospitality venture ‘Courtyard by Marriott’ was launched in Mumbai.

Cineline was the original name that we had conceptualised way back in 2002, before we switched over to Cinemax for our exhibition business.

Global warming has become one of the crucial topics in the past few decades for scientists, environmentalists, the various governments and people around the world. Global warming as a concern is indeed becoming so severe that if unchecked, it will render earth lifeless in a few hundred years. The dire warning is also being relayed to us through movies, TV shows, news, radio, and social media. So what exactly is global warming; what are its consequences; how is it caused and how can it be curbed?

What is global warming?

Global warming is defined as an abnormal rise in earth’s average temperature over a period. As the temperature rises, the planet’s climate alters, causing significant changes in the weather patterns, flora and fauna.

Has it occurred before?

Science has shown us that our Earth has already undergone several periods of global warming in the past, followed by global cooling, way before humans even evolved.

If global warming has occurred before, why worry now?

The reason behind the warming is simple. Global warming before humans, was due to natural causes. It stopped after a period and hence was reversed on its own. The current one is driven by a sharp rise of carbon dioxide in our atmosphere because of population explosion, rapid industrialisation and deforestation. This gas, which is expelled by automobiles, factories, animals and humans, prevents heat from escaping into the space, and is causing the planet’s temperature to go up gradually. The number of automobiles, machines, and industries that spew this noxious gas are going up to meet the demands of an ever-increasing population. Trees and forests that convert carbon dioxide into oxygen are also being cut down, which further increases the amount of the heat-trapping gas in our atmosphere. This man-made increase in the levels of carbon dioxide can’t be reversed if we continue down this very path.

What are the consequences of man-made global warming?

The consequences of irreversible global warming are terrible. Life, which only thrives in certain temperature ranges, will be wiped out from the face of the Earth, if the planet’s mercury continues to rise unchecked. Even if the global temperature increases by a couple of degrees in the next few decades, it will result in an acute scarcity of fresh water, leading to mass migration of population from one place to another. Such migrations will put an immense strain on the region’s infrastructure. Although our planet still has a habitable climate, it may slowly change in the next few hundred years if its temperature continues to rise due to induced global warming.

How long before global warming starts affecting our planet?

The bad news is that the harmful effects of climate change have already started to show up on planet Earth. They include unusual weather (severe in some cases), rising sea levels (due to the melting of ice), and disappearing fauna among others.

How do we curb global warming?

The amount of carbon dioxide in our atmosphere can be reduced by following some simple steps. One way to do so is by reducing, reusing, and recycling garbage. Another simple way is by increasing the number of trees in our surroundings.

Our group, which has acquired the distinct reputation of being one of Mumbai’s premium developers, is keen to protect the environment for the future generations. We understand the grim consequences of global warming, as well as the negative impact it will have on India’s booming economy. To offset the problems that are caused by the ever-increasing carbon footprint, we undertake various initiatives that will make our localities green, and thus pleasantly habitable.
One such initiative that was undertaken by us was #GreenFootprints, which was launched in collaboration with the Green Health Foundation. The Green Health Foundation is at the forefront of tree plantations all over Mumbai.
Through this drive, we aimed to plant several thousand saplings across the city. We roped in around 5000 school and college-going students as we believe, that children are our future. Show them the right way and they will lead us to a better tomorrow.
These students were more than eager to participate in the event and even lauded our efforts to protect the environment. With their help, we managed to plant around 4000 saplings at various places in Mumbai, thereby making this initiative a huge success.
In support of the initiative, Manisha Deshpande, VP, Marketing, Kanakia Group, was quoted saying, “We got all these college students, the students of our schools, which also included RBK schools, to plant and nurture these trees, which will give back to nature, and of course increase the green footprint we leave on our environment, in the long run.”
To add to that, Faiyaz Rangwala, the Director, Sales and Marketing, Kanakia Group said, “Kanakia’s association with this institution aims at planting trees all over Mumbai. This initiative is our bit for the environment and we will keep striving towards it.” 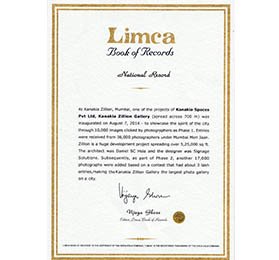 Kanakia in the Limca Book of Records

Sign up for our eNewsletter to stay in touch with us.